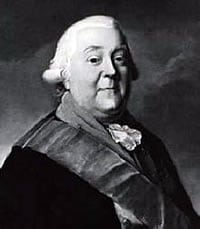 Born in Hesse, Germany, Friedrich von Riedesel fought in the Seven Years’ War and in 1776 led a force of some 4,000 mercenaries in service to the British in North America, taking part in Burgoyne’s advance upon Albany via Lake Champlain and the upper Hudson. Following the withdrawal of Patriot forces from Fort Ticonderoga, Riedesel was ordered to support General Fraser’s advance upon Hubbardston, where his arrival turned the tide of the battle. Upon Burgoyne’s surrender at Saratoga, Riedesel, who had been joined by his wife and daughters, was taken prisoner. He would later be freed under a prisoner exchange and the family would return to Europe in 1783.