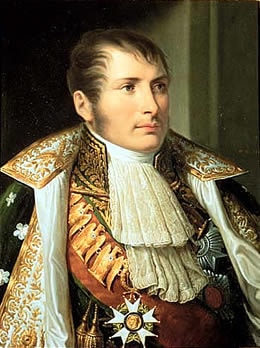 The son of Alexandre Beauharnais and Rose Tascher de la Pagerie (Josephine), Eugène Rose de Beauharnais was born in Paris and grew up amid the turmoil of the Revolution. He first met Napoleon late in 1795 when, at age 14, he requested the return of a sword that had belonged to his father, a meeting likely orchestrated by his mother in order to attract the notice of the popular general. If so, the stratagem worked, and his mother’s eventual marriage to Napoleon would start him on a long and prominent military career. After serving as aide-de-camp in the Italian and Egyptian campaigns, he took part in the Battle of Marengo and was later given command of the Army of Italy. During the fighting of 1813, he secured the army’s southern flank until Napoleon’s abdication at Fontainebleau but did not return to his step-father’s cause during the Hundred Days. After suffering two strokes, he died in Munich at 42.