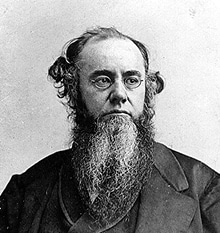 Edwin McMasters Stanton served as Attorney General under President Buchanan and helped prepare the way for the incoming administration of Abraham Lincoln. He remained close to those in power and was appointed by Lincoln to the post of Secretary of War in 1862. Upon Lincoln’s assassination in April of 1865, Stanton became an important transitional figure during the administration of Andrew Johnson. When Stanton sided with Congress in a dispute over Reconstruction policy, Johnson sought to oust him, leading to the initiation of impeachment proceedings against Johnson.