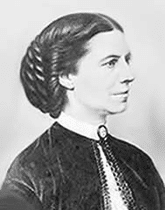 Strong-willed and fiercely independent, Clarissa “Clara” Harlowe Barton was born in Oxford, Massachusetts, where she began her career as a teacher in a school she helped found. Her war service began in April 1861, when she helped the men of the 6th Massachusetts recover from an attack by a Baltimore mob. Later, on her own initiative and symbolizing the thousands of women who cared for the wounded, she organized relief efforts in the aftermath of First Bull Run and later served as superintendent of nurses for the Army of the James. After the war, she visited Europe, where she was active in relief efforts for the wounded of the Franco-Prussian War. Upon her return, she was instrumental in establishing the American Red Cross, which she headed for many years.