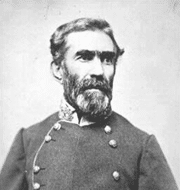 A native of North Carolina, Braxton Bragg graduated West Point in 1837 and served with distinction in the Mexican War. Following a stint in civilian life, he returned to military service prior to the Civil War and was named commander of the Army of Tennessee in the aftermath of the Battle of Shiloh. During his subsequent invasion of eastern Kentucky, he showed early promise only to retreat following an indecisive battle at Perryville. At both Stones River and Chickamauga, Bragg achieved early success, yet failed to win through to decisive victory. Increasingly resented by his troops, he suffered a rout at Missionary Ridge and was replaced by J. E. Johnston. He served out the war as an advisor to Jefferson Davis.