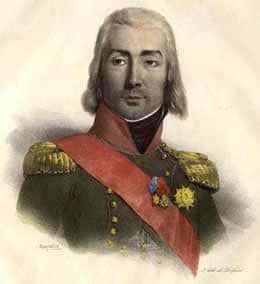 The son of a country doctor, Jean-Baptiste Bessieres joined the National Guard during the Revolution and went on to serve in the Army of Italy, winning Bonaparte’s respect in the crucial Battle of Rivoli. He fought ably in the Egyptian Campaign and was one of the officers chosen to return with Napoleon to France, where he took part in the coup d’etat of 19 Brumaire. Eventually placed in command of the Imperial Guard, he played a large part in its growing legend for invincibility. At Eylau, he joined Murat at the head of the Guard cavalry to turn back a daunting Russian attack. The following year, 1808, he was given corps command in Spain, where he won the Battle of Medina del Rio Seco against very long odds. Assigned to the Guard cavalry during the Russian Campaign, he was instrumental in saving the Emperor from an attack of Cossacks near Malo-Yaroslavets. He was killed near Lutzen in the fighting of 1813.