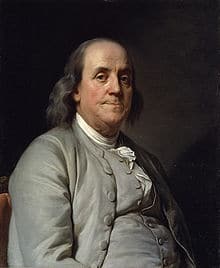 Born in Boston to parents of modest means, Benjamin Franklin received much of his early schooling while an apprentice in his brother James’ print shop. At the age of seventeen, he ran away to Philadelphia to begin his own career, eventually publishing a popular tract called The Pennsylvania Gazette as well as a widely-read compendium of folk wisdom known as Poor Richard’s Almanack. A voracious reader, he became a prolific scientist, inventor, and philosopher, and traveled widely in England and France. As radical in his politics as in the rest of his thinking, he was an early supporter of the Revolution, and a major factor in its success, serving variously as Postmaster, Ambassador, and drafter of the Constitution. He succeeded John Dickinson as President of Pennsylvania and lived long enough to witness the founding of the United States.