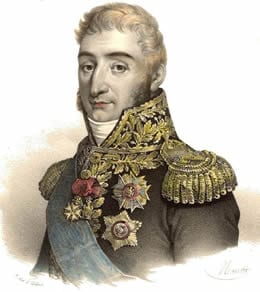 The son of a Paris stonemason, Pierre François Charles Augereau joined the royal cavalry at a young age and, after killing an officer over a matter of honor, fled to Russia, returning to military service in France only after the outbreak of revolution. Within five years he had risen from the rank of private to major-general in the Army of Italy, and would go on to command troops in the battles of Jena and Eylau. Replacing Saint-Cyr in Spain in 1809, he captured Gerona before returning east to lead a reserve corps during the disastrous Russian Campaign. He remained loyal to Napoleon throughout the Leipzig Campaign, but during the fighting of 1814, he refused battle and proclaimed his support for the Bourbon cause. During the Hundred Days, his overtures to the newly-restored Emperor were rejected, as were his efforts to serve under the Restoration that followed.