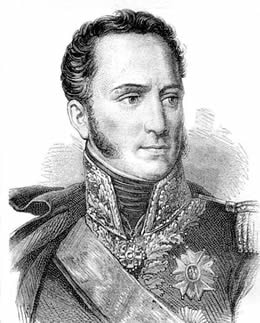 Armand Augustin Louis de Caulaincourt entered the army at a young age, and by 1801 he had risen to the rank of colonel. Chosen by Napoleon for a diplomatic mission to St. Petersburg, he soon became a trusted adviser to the emperor. Though he took part in the Grand Army’s advance upon Moscow, when asked to act as an intermediary in peace negotiations, he refused, correctly counseling Napoleon that the Tsar would not make peace under such circumstances. Caulaincourt served as Minister of Foreign Affairs during the Hundred Days, yet managed to escape censure during the Restoration. His memoir, “With Napoleon in Russia,” would be discovered by chance in an attic nearly a hundred years after his death.