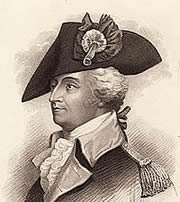 Anthony Wayne was born in southeastern Pennsylvania and worked as a surveyor for much of his early adulthood. At the outbreak of the Revolution, despite a lack of military training, he raised a regiment and took part in the invasion of Canada in June 1776. Though the campaign would be driven back in defeat, Wayne distinguished himself in a rear-guard action at Trois Rivieres, earning renown as a tenacious fighter. The following year, during the British advance on Philadelphia, troops under his command were taken by surprise and badly mauled in what was known as the Paoli Massacre, for which he would wreak revenge in subsequent battles at Monmouth, Stony Point, and Green Spring. Known as “Mad Anthony,” he would give rise to a widespread and durable legend.