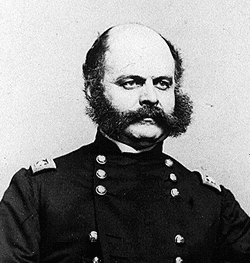 Famous as the originator of “side-burns,” Rhode Island native Ambrose Everett Burnside graduated from West Point in 1847 and at the outset of the Civil War was quickly promoted to brigadier. His battlefield debut at First Bull Run was less than impressive, but he made a success of an amphibious campaign along the North Carolina coast and was promoted to major general. Though widely criticized for his delay in seizing the bridge that would bear his name at Antietam, he was offered command of the Army of the Potomac following the battle and would bear responsibility for the subsequent Union disaster at Fredericksburg. Later involved in the desultory Battle of the Crater at Petersburg (July 1864), he resigned shortly thereafter.