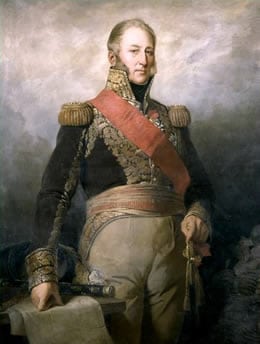 The son of a cloth merchant, Édouard Casimir Mortier saw action in many of the battles of the Republic, achieving the rank of general prior to Bonaparte’s take-over in 1799. Named Marshal in 1804, he played a key role in the Austerlitz Campaign, holding off a Russian counter-march north of the Danube against long odds. At Friedland, he commanded a corps against the Russian right-wing, driving the enemy into the Alle River. Though he supported Napoleon during the Hundred Days, he did not take part in the Waterloo Campaign for reasons of illness. Eventually reconciling with the Royalists, he served as Prime Minister under the second Restoration and was killed in an assassination attempt intended for Louis Philippe during a parade in 1835.