Editor’s note: In the spring of 1864, with the Army of the Potomac encamped in northern Virginia, Lieutenant General Ulysses S. Grant vowed, “I propose to fight it out on this line if it takes all summer.” As it happened, the ensuing campaign would take all of that and more.

From FATEFUL LIGHTING, “Every Day and Every Hour” by William Hillenbrand:

On the face of it, the situation the Lincoln government confronted as the spring of 1864 drew on was simple, straightforward, and promising. The summer of ’63 had dealt the Confederacy bitter blows at Vicksburg, Gettysburg, and Chattanooga. Further, the South’s agricultural economy was buckling under the strain of trying to fight an industrial war, and hardship on the home front was becoming increasingly severe. Lincoln intended, as he had nearly from the outset of the conflict, to exert the North’s superior strength at every point to batter the rebellion into submission. But there was one new element in Lincoln’s original design: he believed now he had the man who could, as he put it, “do the arithmetic.” This man of course was Sam Grant, one-time hardscrabble farmer, failure, and drunk, now a lieutenant general, the first to hold that rank since George Washington. Grant now replaced Henry Halleck as general-in-chief of the armies. Halleck, who had never effectively directed the war effort, became chief of staff, in essence the highest ranking clerk in the nation.

Lincoln liked immensely the new general-in-chief’s way of thinking. In the past, Grant argued, northern armies had “acted independently and without concert, like a balky team, no two ever pulling together.” This lack of concert had allowed the Confederacy to reinforce at threatened points. Longstreet, for example, had been sent both to Suffolk in southern Virginia and Chattanooga in Tennessee while Lee held the line in northern Virginia. To win the war, Grant was sure, the North had to sustain the pressure on all fronts until it became unbearable. Seizing and holding territory meant nothing, and even less than nothing because holding it demanded manpower to guard it. The only thing that mattered now was the destruction of Southern armies and the agriculture and industry that sustained them. Conquest, Grant had concluded after Shiloh, was the only way to end the rebellion. Meade in the East received pointed instructions: “Lee’s Army will be your objective point. Wherever Lee goes, there will you go also.” (Lincoln must have felt relieved to find at last a general who didn’t blather about what he would do when he got to Richmond.) Sherman in the West was to “move against Johnston’s army, to break it up, and to get into the interior of the enemy’s country as far as you can, inflicting all the damage you can against their war resources.” Again, the objective was the Rebel army, not Atlanta. Elsewhere Nathaniel Banks in Louisiana would drive on Mobile, Benjamin Butler would drive up the James River and breach the line between Richmond and Petersburg, and Franz Sigel would drive up the Shenandoah Valley and cut Virginia west of the Blue Ridge off from Lee. It was just the sort of design Lincoln had been urging all along. As the former farmer’s boy from Kentucky put it now, “Those not skinning can hold a leg.” There was one catch, though. The beast had best be skinned before the November election. 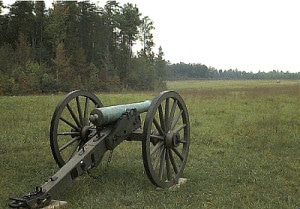