Home » BORN IN BATTLE: American Revolution » Text » I. GALE FROM THE NORTH

I. GALE FROM THE NORTH 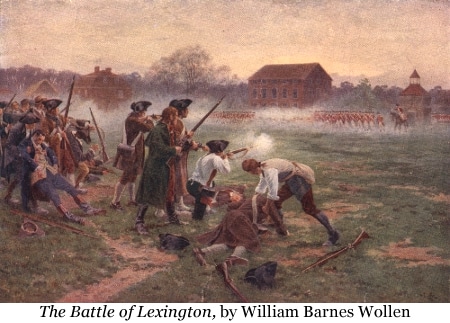 Gentlemen may cry, ‘Peace! Peace!’–but there is no peace…. The next gale that sweeps from the north will bring to our ears the clash of resounding arms!
–Patrick Henry

Among the more ominous harbingers of war leading up to the American Revolution was an encounter witnessed by young William Gavett of the town of Salem in the colony of Massachusetts Bay. A schoolboy at the time of the incident, Gavett would later write: “On Sunday, 26 Feb’y, 1775, my father came home from church rather sooner than usual, which attracted my notice, and said to my mother, ‘the reg’lars are come and are marching as fast as they can towards the Northfield bridge’; and looking towards her with a very solemn face, remarked, ‘I don’t know what will be the consequence but something very serious, and I wish you to keep the children home.'” The British Regulars marching briskly in the February cold were a detachment of the 64th Regiment commanded by Lieutenant Colonel Alexander Leslie. They had boarded a transport in Boston Harbor that morning and disembarked at Marblehead Neck, some ten sea miles to the north. From there, Leslie intended to march up the road to Salem, seize cannon and other munitions held by the Salem militia, and swiftly return to Boston, mission accomplished. As another Salem resident recalled, however, Leslie and his men “little knew the jealous watchfulness of the Americans. By the time their feet touched the land… the alarm was immediately given by a dozen men running to the door of the new meetinghouse, beating the alarm signal agreed upon, and crying out, ‘to arms! to arms!'”

At least in part, this urgent call to arms of the Salem militia was provoked as well by the jealous watchfulness of other Americans in Salem. These were Tories, men and women who remained loyal subjects of King George, the third of that name to rule Great Britain. Some of these, spies according to their Whig neighbors, had in fact revealed the precise location of the hidden cannon to Major General Thomas Gage in Boston, now both commander-in-chief of His Majesty’s forces in all of North America and military governor of the increasingly ungovernable colony of Massachusetts. It had been nearly a year since the last royal governor, Thomas Hutchinson, had advised the king that the “course of the law [in Massachusetts] is now wholly stopped. All legislative as well as executive power is gone.” Gage in his turn, though generally sympathetic to Americans, had likewise made up his mind that “civil government is near its end, conciliation, moderation, reasoning, is over; nothing can be done but by forcible means.” Still, General Gage was hardly eager to use force to subdue this province now in all-but-open rebellion, for despite his imposing title he had at the time barely 3,000 troops at his command. Accordingly, he wrote his superiors in far-off London that he was determined to “avoid any bloody crisis as long as possible until his Majesty will in the meantime judge best what is to be done.”

Of course, neither the best judgment of the king and his ministry nor the sincere resolve of General Gage to keep peace in the imperial household was of any particular use to Lieutenant Colonel Leslie and the men of the 64th just now, for they were marching directly into a confrontation that had all the makings of a bloody crisis. As they marched up the road to Salem, drums beating and fifes playing the mocking tune “Yankee Doodle,” the Regulars were met at the Northfield Bridge by the good people of Salem, tumbling out of the Sabbath calm into the cold. Many were armed, most were angry, and all appeared resolved that the redcoats would not cross this bridge and march into their town this day. To that end, the northern leaf of the drawbridge had been hoisted, leaving Leslie on the far bank as angry as his antagonists on the Salem side. Shouting across the span, Leslie declared he would fire on the townspeople if they did not lower the bridge straight away. As Billy Gavett (who had not stayed home with mother) remembered it, Captain John Felt of the Salem militia shouted back that if the redcoats dared open fire, they would “all be dead men.” Felt said later that he meant to seize Leslie and leap into the river with him, willing to “be drowned [himself] to be the death of one Englishman.” Safe for the moment from Captain Felt’s murderous grasp but still unable to march his men across, Leslie thought he might use two barges on the near bank to row across. But when he sent a squad down to seize them, some townsmen were already aboard and at work scuttling their own boats with hatchets. In the ensuing scuffle between soldiers and Salemites, one Joseph Whicher was pricked by a soldier’s bayonet. Blood, that most volatile fluid, had been spilled. Not much, it was true, but enough to raise the temper of the jeering and threatening crowd another notch. “Soldiers, red-jackets, lobster-coats, cowards,” one man called out lustily, “damnation to your government!” It was not a propitious moment for the cause of peace, as even then the roads leading down to Salem were filling up with armed militiamen from as far away as Danvers.

Leslie himself, hotter than ever while his men shivered in the cold, was not deterred from his purpose: “I will get over this bridge before I return to Boston,” he announced, “if I stay here till next autumn… By God, I will not be defeated.” What he would do when and if he got to the other side was hard to say, though, because David Boyce, a Quaker who lived nearby, was even then hauling the disputed cannon away to the northwest. Another man of peace was immediately at hand, however, the Reverend Mr. Barnard, whose Congregational services had been halted by the first alarm. “I pray, Sir,” Barnard ventured to Leslie, “that there will be no collision between the people and the troops.” In this moment of calm, Leslie, thus far frustrated in his threats of military force, thought he might try the force of argument. “It is the King’s Highway that passes over that bridge,” he insisted to Captain Felt, “and I will not be prevented from crossing it.” Just then, however, an old Salem man on the scene, James Barr, posed a counter-argument: “It is not the King’s Highway,” Barr and his fellow townsfolk held: “it is a road built by the owners of the lots on the other side, and no king, country, or town has anything to with it.”

Leslie, of course, was the king’s soldier, not his barrister. In the name of the king and for the sake of his own and his regiment’s honor, he might well have forced the bridge in a bloody showdown then and there. Thus matters stood: Leslie had his orders and the people of Salem their firm resolve to resist his execution of them. The palpably real possibility of a shooting war was hanging in the winter air. But it had not quite come to that. In the end, Colonel Leslie and Captain Felt put their heads together and came to an awkward compromise: the Americans would lower the bridge, Leslie and the men of the 64th would march across the distance of fifty rods, and return at once the way they came “without troubling or disturbing anything.” Having approached so close to tragedy, the confrontation was resolved in a kind of comic opera, which John Trumbull celebrated in a playful squib:

Through Salem straight, without delay,
The bold battalion took its way;
Marched o’er a bridge, in open sight
Of several Yankees armed for fight;
Then, without loss of time or men,
Veered round for Boston back again,
And found so well their projects thrive
That every soul got home alive.

But if the cause of peace had prospered here at the Northfield Bridge on this February day in 1775, it was not at all clear how much longer it would hold sway. In the seats of power in London, statesmen and soldiers had been considering for some time the “forcible means” by which the king’s dominion might be restored in New England. On the American side of the Atlantic, there was no question that the colonials were training for a test of arms. The number of militiamen that had marched to Salem within the hour was just one evidence of their purposeful preparation. But whether the Americans had the will to resist the king’s force with force was an open question. Still, perhaps it would have been instructive for King George to hear what Colonel Leslie heard as he wheeled his column around in Salem and headed back toward Marblehead. From a window of a nearby house Sarah Tarrant, a nurse, called out to the passing redcoats: “Tell your master he has sent you on a fool’s errand and broken the peace of our Sabbath. What, do you think we were born in the woods to be frightened by owls?” When a soldier raised a musket in her direction, she cried: “Fire if you have the courage, but I doubt it.” It was a strange ending to a puzzling day. Salem’s pacifist Friend, David Boyce, had brought his team out to haul implements of war away to a place of safety. Sarah Tarrant, a healer, had shouted hot, belligerent words at some of the western world’s toughest professional soldiers. Two men of war, Colonel Leslie and Captain Felt, had reasoned together somehow and preserved an uneasy, face-saving peace. As the British troops marched away from the bridge where war did not begin, their band was playing the tune “The World Turned Upside Down.”

This incident at the bridge, though minor, was not trivial. Was this country lane properly the king’s highway after all, or did it rightfully belong to the people of Salem who built it and held its deed? The confrontation brought into focus fundamental questions that abler minds than Colonel Leslie’s or Mr. Barr’s had been arguing about with increasing rancor for more than a decade. What were the legitimate rights of the king’s subjects in America under the ancient British constitution? And what was the proper relation between the just powers of the colonial assemblies and the authority of Parliament? These were ultimately questions of life, liberty, and property, and as winter turned to spring in 1775, they were no closer to mutually acceptable answers than when they first arose back in ’64 and ’65 in the debates about Parliament’s right to tax the colonies. Thus, the English Parliament continued to assert its absolute right to govern the colonies in all cases whatsoever, and the colonials in America to insist on their incontrovertible right as Englishmen not to be governed without their consent. With these fixed resolves came much saber-rattling from the contending parties, and more than mere rattling it seemed to many thoughtful observers. Cambridge Patriot Hannah Winthrop wrote in tears to her friend Mercy Warren: “The dissolution of all Government gives a… Horrid prospect of an intended Battle. Kind Heaven avert the Storm!” Her husband, in a letter to John Adams (an active Whig politician who was doing his part and more to sow the storm), thought the time was not far off when he “must beat [his] plowshares into Swords, and pruning Hooks into Spears.”